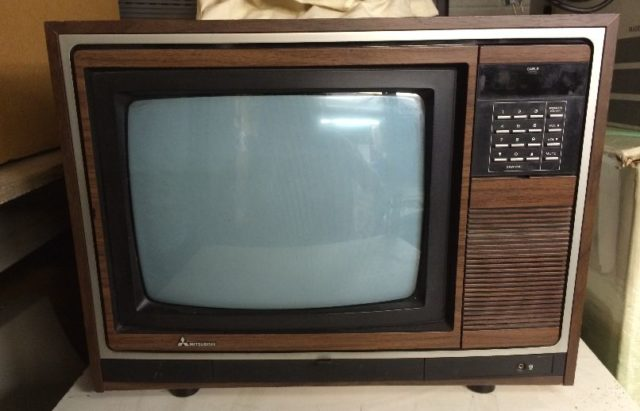 My plasma tv died the other day. I'm not really looking to replace it, if I do not have to, and have it half apart in order to diagnose the problem. It's but nine years old, which I view such products as being just getting broken in. (I hate having my opinion of modern appliances confirmed.) We'll see.

Of course it happened at the worst possible time of year, in the midst of Packer football season, though that does remind me of how I caught my daughter observing a few decades ago upon how our tv only got news programs and Packer football to one of her friends who was probably telling her about MTV or something of that ilk.

So, I dug out my old 1980 Mitsubishi tv from the basement, bought a digital to analog converter, and I'm in business. The only reason I'm telling this story is because of the Mitsubishi, which was about as good as it got back in 1980, when I bought it, and that wasn't bad even from where I'm sitting right now.

It died somewhere around the year 2000 and I dutifully loaded it in the truck to take it down to the tv repair shop, back when you could pick which repair shop you wanted to use. After 20 yrs I figured it was probably the end of the line for it, but I agreed to the diagnostic fee of $38 and went on my way, right off the next day to buy a new tv. It was, predictably, football season of course.

I think I went to Best Buy, or whatever was their 2000 equivalent, and the kid there hooked me up with a JVC tv. I specifically asked him if I could hook it up to my stereo speakers and a few other things about it, and he assured me I could. I then instructed the callow youth not to send me home only to find I could not do so, and he assured me again that I could. Got home, unboxed it, and five minutes later I was loading it back in the truck. No provision for external speakers on it. I note that part of the purchasing experience has not changed in the last twenty years, other than in becoming ubiquitous. I somehow restrained myself from what is today known as going all "Karen" over the damn kid, and ended up with a Sony Trinitron, which eventually proved to be no better picture quality than the Mitsi, and substantially less reliable over the ensuing years. That was probably on a Saturday.

On the following Monday the repair shop called and told me to come pick up my tv. I asked what I owed them and they said, $38. I assumed they'd not been able to fix it. As I paid them the $38 I asked what was wrong with it, and they said some part or another, and I was getting all set to hear it couldn't be fixed or it was going to cost me more than it was worth when the technician said, "those Mitsubishis are darn good tvs." I said, "you mean you fixed it?" "Yeah, it was something which took five seconds to find and the part costs a buck or two." I took it home and set it down the basement awaiting just this day.

The picture is pretty darn good, though nothing like a plasma, with the color true, and better speakers than has the plasma. It'd probably look even better had I bothered to clean the screen on it. I watched a lot of Lions football on that tv, and Packer football of course. In fact, it was on that very tv in 1994, we watched Brett Favre roll out and hit a wide open Sterling Sharpe, who'd pulled a hamstring on the previous play and couldn't get off the field, with an impossible 40 yd across the field touchdown pass which would eventually be the difference in the game. The next thing I heard was my buddy, lifelong Lions fan, standing up, throwing his hat down, announcing, "that's it. I am now a Colts fan." So, I'm sad to say that nothing, and that's quite literally nothing, has changed since 1994, and today I'm watching Lions football on the Mitsubishi again.