Atom is a word derived from the Greek meaning "without division." All known elements are made up of innumerable tiny particles that we call atoms.

The current idea of ​​the atom has changed a lot since man first used it.

The word "atom", that is, without division, is not in accordance with current knowledge, since man knows particles smaller than the atom. In modern times it has been possible to divide the atom. The discovery of the atom and its applications is a great achievement of science. Atomic energy has now been used, not only in the manufacture of the atomic bomb, but to power large ships, to operate power plants, for the treatment of cancer and other peaceful uses.

💥Structure of the atom💥

In the atom we can distinguish two parts: the crown and the nucleus.

🔸The crown of the atom is made up of very small particles charged with a unit of negative charge and of negligible weight called electrons. Electrons rotate around the nucleus in very complicated orbits at a speed close to the speed of light (280,000 kilometers / second.)

🔸The nucleus of the atom is in the central part of the atom. It is basically made up of two types of particles:

In chemistry, the atoms of each element are represented by a capital letter or an upper and lower case.

Alberth Einstein discovered the formula that allows us to calculate the energy that is released when mass is fully converted to energy. There are two types of reactions to obtain atomic energy:

🔸Fission consists in that when a uranium nucleus is bombarded, the nucleus splits, releasing a large amount of energy.

🔸Fusion consists of the union of several nuclei of some light elements, such as hydrogen, with the release of energy.

If all this large amount of energy is released in a single instant, an atomic explosion occurs, destroying everything it achieves in a diameter of several kilometers. If this energy is released little by little it can be used to move machines, ships, trains, airplanes, rockets, etc.

The fission of one kilogram of uranium-235 produces as much energy as 3 million tons of coal can produce.

The bodies, according to the nature of the atoms of which they are constituted, are divided into simple and compound.

If bodies have only one class of atoms they are called simple bodies or elements. Thus, they are elements: hydrogen, oxygen, copper, iron, aluminum, sulfur. Today 118 elements are known. The combination of the elements produces the composite bodies. 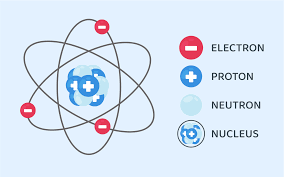