Sometimes I just have to shake my head in disbelief when Thailand tries to do certain things. When it comes to technology, Thailand wants to do major things but after years of living here I have seen them fall very short when it comes to the actual execution of those projects.

In the time that I have been here I have seen Thailand attempt to get involved with apps like this on a number of occasions and without fail, the app doesn't work reliably and therefore the places of business that were meant to be using it stop using it and the whole system just falls apart.

The last time they had one of these things it was simply for contact tracing and it had a massive amount of issues including not being compatible with certain phones and servers that were down more often than not. When I went to the airport with my QR code ready with my app in hand that I was told you absolutely must have in order to travel, the people at the gates were just waving people through. Although it was never admitted by the government, it is assumed that just like many other technological rollouts, this one was a complete failure and they quietly stopped using it altogether.

I don't know the specifics but this was meant to be used at all public gathering places including simply entering medium sized businesses like a McDonalds or Starbucks and it was up to the staff to QR code scan you upon entering. A friend of mine that owned such a business said that the user-interface was a nightmare and the mechanism rarely worked so at some point his staff just started to pretend to scan codes. I would imagine this was happening all over the country.

There have been a number of other tech projects that were even smaller in scale that also did not work and one in particular was a check-in system that was designed to track tourist movements (this was pre-covid) but the system web interface would only function with Windows Explorer. This was years ago but when was the last time you actually saw someone using Windows Explorer?

This new project is much larger in scale than either one of these things and includes medical history that a lot of people are probably not really keen on having in a database that is maintained by the Thai government anyway. 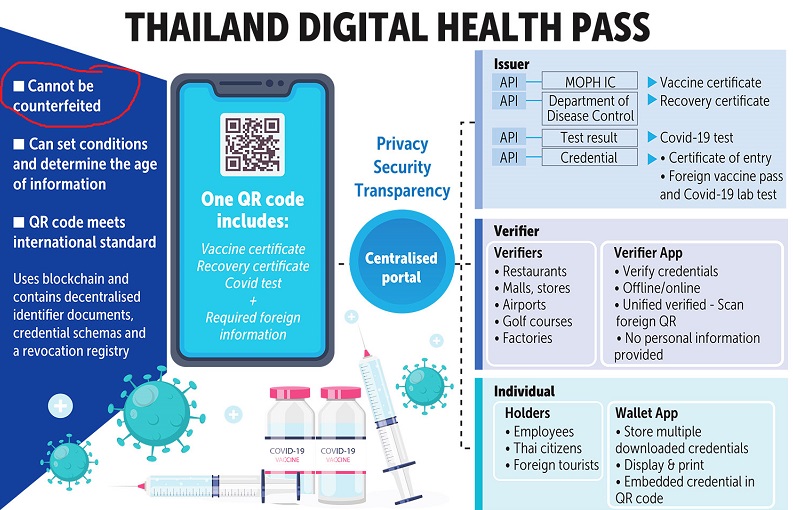 I find a lot of things amusing in this helpful graphic but in particular I enjoy the part where it says that it "can not be counterfeited." I don't know if you know much about Thailand or South East Asia in general (perhaps Asia in general) but everything is counterfeited over here. Just because you've got some database somewhere doesn't mean that it can't be spoofed. We have already seen this happening in other countries with similar economies to Thailand.

I'm not a fan of these sorts of things and if they force them upon us here in Thailand I will probably just choose to leave. I do not trust my own government with my personal information but I trust one that is rife with obvious corruption and a track record of digital failure even less.

At least it will be amusing to see them try to roll this out and we can put it right in there with the other QR apps that have failed, the CCTV in Bangkok failure, as well as the biometrics at the airport rollout failure.