Science is the study of the physical and natural world using theoretical models and data from experiments or observations. And science divided into 2 main categories as, natural and social science.

The science involved in the study in the study of the physical world and its phenomena is called natural science. The aim is to discover the world and the rules. Social science is a branch of science that studies society and the relation of an individual within a society. In here natural science is the oldest one. Formal science is related to both of those 2 due to mathematics and computer science. Branches of natural science are biology, physics, astronomy, and earth science. Branches of social science are anthropology, communication studies, economics, education, geography, history, law, linguistics, political science, psychology, and sociology.
It also can rather be classified by their common perspective than through a specific subject of study. Even both of those two have the same logic of inquiry. Both of them affected by mystical, liberalism, religious, and cultural believes. especially this affected to social science. Sometimes natural science uses to find answers to social science. There are few similarities in those two sciences understanding phenomena, making a prediction, causality: what causes what, pillars: logic and observation, studying what and why, looking for generalities, looking for patterns, establish relations between variables, social sciences. such as their different origins, subjects of study, and limitations distinguish those two.
So what are the differences between those sciences?. In natural science discussion habitually involves mathematics (notable exceptions: descriptive sciences, biology, etc.) and uses scientific methods. But in social science discussion is often verbal which methodology starts with an assumption and is gradually filled by a series of experiments and observations which are deal with human emotions (the data can be selected from a sample of an individual or group). Even though both of those two have laboratory experiments in social science it is not easy to have a correct result from that. In natural science, variables denote definite things that are produced by either reproducible experiments or first-principle laws through mathematics. there is a close system that can control the variables. Where in other cases variables are taken from databases (big data), questionnaires, or polls. Observation is less of a problem. It uses an open system, where it can’t control variables. Hunt for basic laws that explain the relations between variables happens in natural science where social science hunts for patterns that indicate correlations between the variables. Find basic laws that can explain phenomena in realms hard to observe (micro, galactic) is in natural sciences. And challenges in social science are to find basic laws that can explain these correlations. So, in natural science, it talks about qualitative and social scientists talk about quantitative. In natural science, Models are simplified in that case it doesn’t take everything into account, neglect unimportant things. These askes only the main question, what is important. And it studies the model by using basic laws and theories developed on the basis of them. But in social science Variables are sets of attributes, categories, values. It has a model of logical generalizations on the basis of observed patterns from which principles can be developed and predictions can be made. Its Understanding comes through the mode (a successful and general model called a paradigm).
At natural science, it represents its result as, more data, less discussion. Rigorous structure of scientific papers of natural science is introduction, methodology, results, discussion, conclusion in order. Extensive references to others (also to laypeople). Because there can be earlier research about it. And also it uses graphs rather than tables to show their data. When doing a slide show the points are very carefully taken. In social science, there is More discussion and data are not always available. Papers or reports are often essays and analyses. Presentation is done by reading the text. It has a Lack of conciseness where the things are complex so they need to be explained. Social Sciences are about Humans and their behavior so their feelings can be hurt by the results. But not in natural science. Those results may be the case to change them. Natural science concentrates on the microscopic world while social science concentrates on the macroscopic world. If they described, Microscopic world (microscopic, molecular) level molecules buzzing around which motion can be described with classical (newton) or quantum (schrödinger) mechanics. The millions of microscopic events average out into a macroscopic answer that can be measured (thermodynamics). Statistical mechanics (first-principle) describes the link between the two-level. Macro world or Micro theory deals with issues of social life at the level of individuals and small groups. Also, there is a difference between in how the evolute. Natural science is from genetics. The replicator is carried by the organisms. They pass it from generation to generation. The replicator of social science is a meme. The replicator is carried by the human brain.
In both cases they have limitations! In financial and technical. In natural science, the most primary limitation is in measurements (instruments like microscopes). Because to have accurate data it needs a machine which can give high accuracy. Financial effects are the most common things that can see in many research projects. in social sciences is limited by various factors including the need to base findings on interpretations, the complexity of a field in which single variables cannot be controlled for easily. And also the financial problems and ethical issues. Since the subject of study are social actions which are often motivated by numerous factors. social scientists who want to make meaning of their observations will have to interpret their data in order to analyze it. Ethical issues arise many times from the fact that some very interesting questions may not be studied without sacrificing the mental or physical safety of people. Those are not the only differences between those 2 things. There are a few more others but not very important. Such as their development.
Natural and social science are both affect mankind. But the way they affect is different. So, what they give to the human is also should be different. But they are not completely different. 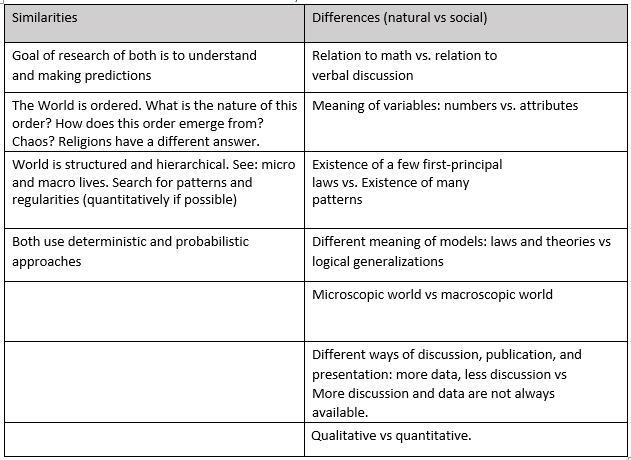