Movie "Red Like the Sky" | Dreams will tell you

This is a true story, this film mainly tells the story of the famous Italian blind film sound effects master. 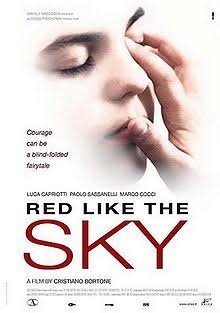 Michael really liked movies since he was a child. Due to an accident, he was blind in both eyes, and at first he could see a bit of a hazy shadow. I remember he had nightmares, and when he got upstairs, he went to find the switch and kept going. Turning it on and off, he said to his life teacher: "The electricity went out." It's really uncomfortable to see here. Michael has been terrified of the dark since he was young, and it's hard to imagine how he spent those dark first days.

At first he was impatient, impatient and throwing a tantrum, which was too normal for a 10 year old child, let alone Michael who was just blind. In one class, he threw a braille board on the ground, and Teacher said to him: "Why do musicians close their eyes when they play, because the tones will change and become stronger.", He became interested in life. , he used his listening style to see the whole world, filmed his own edits, made a good group of friends, and a group of them recorded audio. However, the process did not go smoothly, and the principal was very much against it, but the kind and careful teacher never gave up, and even quarreled with the old principal. When the show is presented in front of all parents and seeing the happy smiles on the faces of the parents and children, at that time the happiness was just right Happiness has become a very simple thing.

Through the video, I have several thoughts:

1. Have a good guide

This is very important. Therefore, when choosing a teacher, you must understand his personality, his personality, his interpersonal relationships, his teaching methods, his interests, etc., and note that one cannot unilaterally define him, human beings are also three-dimensional. Don't look at the whole but stick to the part What's the difference between this and a blind man touching an elephant?

The dream of the film took root in Michael's heart from the very beginning. Even though he was blind on both sides later, he never gave up on his dream. Even though this path was 10,000 times more difficult than before, he was relying on himself. Perseverance and intense enthusiasm make the dream tree grow taller and taller.

3. Do something another way and discover the beauty of alternative living

"When God closes this door, He will open another door for you in another place." Even though Michael couldn't see him, he listened with his ear and imagined through listening. When you close your eyes, The world is in your eyes, isn't that beautiful? But when you finish your work today and look up, you will only see a rainbow in the sky in the distance. Rainbows light up colorful lights in your heart and light the way forward. I wish each of us complained less and smiled more.