MIT - The fortress of orthodoxy. 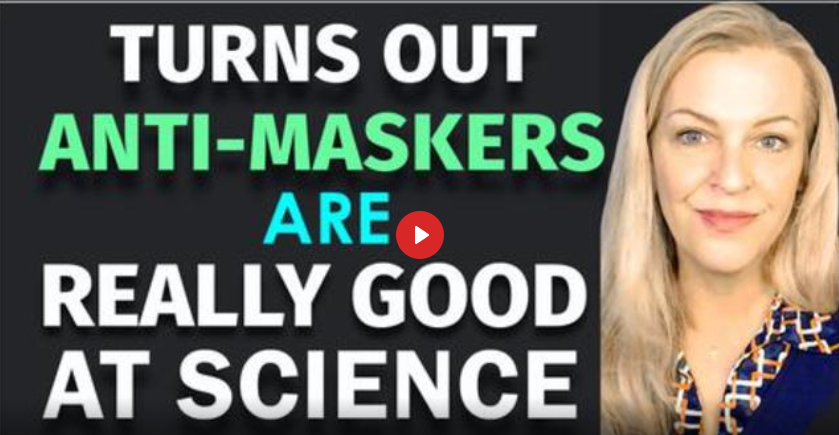 Amazing Polly St George has found a research paper published by MIT last year (https://arxiv.org/pdf/2101.07993.pdf). The paper says “anti-maskers” are better at examining and explaining the real science of viruses and Covid than “mainstream science” and they're using that skill to attack the “scientific consensus” with accurate facts and solid argument expressed in effective graphs and charts. These "anti-maskers” believe that “science is a process, not an institution” and they are persuading the public using real scientific facts which demolish the official narrative on masks and lockdowns with truth. These anti-maskers believe that if people hear the real facts as established by real, peer reviewed scientific research the people can and will and ought to think for themselves.

And what’s the point of this paper from the Massachusetts Institute of Technology, one of the world's premier temples of experimental science and technological research? Is anti-maskers’ independent thought, based – as this paper admits – on real science as a process, not admirable? NO!

Science has nothing to do with truth, says MIT, when you strip away the gobbledegook. Science is Institutional Consensus. The issue, says MIT, bastion of Science, is all about Language. It’s all about Persuasion. Anti-maskers are using Truth and MIT knows that Truth has nothing to do with Science and the the Institutional Scientific Consensus does not have truth on its side. How, laments this paper, can we defend our Consensus?

Denigrating these people by labelling them as “Christian fundamentalists”, “Tea party activists”, ‘White Christian traditionalists”, “June 6th insurrectionists”, “evangelical voters”, “climate change denialism" and people who “think for themselves to horrifying ends.”!! These are phrases salted all through this paper – which makes a good start already on a propaganda and suppression campaign which the writers advocate underneath their jargon. People who “think for themselves” are a horrifying Cult – We of Consensus Science are not a cult, oh my goodness no. Bigotry inculcated by propaganda and enforced by intimidation and social media censorship is how MIT says these independent thinkers with their facts must be countered. Don’t believe me or Polly?

“Coronavirus skeptics champion science as a personal practice that prizes rationality and autonomy; for them it is not a body of knowledge certified by experts”

No! We don’t want anybody having better ‘media literacy’ than we do! They might start seeing through our lies!

“For anti-maskers valid science must be a process they can critically engage for themselves in an unmediated way. Increased doubt, not consensus, is the marker of scientific certitude.

No the problem is that these anti-maskers are GOOD at science and they have the facts on their side!

“This is a community of practice focused on acquiring and transmitting expertise … this is a subculture shaped by mistrust of established authorities and orthodox scientific opinion … Its members value individual initiative… As a subculture anti-masking amplifies anti-establishment narratives pervasive in American political culture. Data literacy, for anti-maskers, exemplifies distinctly American ideals of intellectual self-reliance…”

Doesn’t this paint a picture of the people whom the writers are talking to? American values of individual initiative, seeking truth in facts, thinking for yourself, liberty of thought and freedom of speech and, most horrifying of all, Christianity, the values enshrined in the US Constitution and Bill of Rights, these are a SUBCULTURE! These values are the enemy of the grand masters of MIT. How, my masters, are we to destroy these people and their American values, is what this paper asks. And the answer?

No! Educating the public is what our Enemies do! We must do the opposite! We must go after these anti-maskers personally and squelch them!

“Rather, it requires a sustained engagement with the social world of visualizations and the people who make or interpret them.”

The social world? What’s that supposed to mean?

This study extended from last March to last October, a time when critical opinion based on scientifically determined facts was freely challenging the Covid-19 orthodoxy. Scientists like Sucharit Bhakdi or John Ionnidis could advise people to check the sources for themselves. It was a time when YouTube and Google were gathering all sorts of great data on the “social world” of us critics. After last October the “engagement” began as YouTube accounts of critics began to be destroyed.

This paper paints a picture of MIT. MIT sees itself as a fortress of orthodoxy and a priesthood commanding its propaganda witch hunters. Forgive me, I just finished once again viewing The Lord of the Rings, so I visualize MIT as the Tower of the Dark Lord whose laboratories of the study of human nature are torture chambers to extract the “data” to destroy human liberty of thought.

This paper pretends to be about labs and white coats and data but really it is all about language as a tool of manipulation to “manufacture consent” to the Covid-19 Orthodoxy. That makes this paper a very fitting document to be produced at MIT, the home of Noam Chomsky.