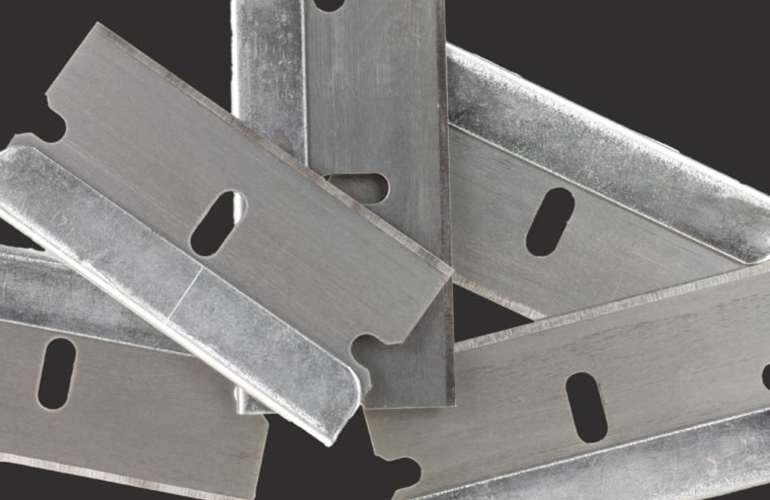 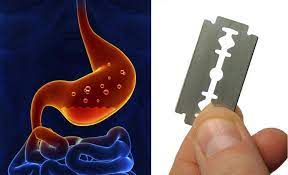 Of course, if you had a razor blade in your stomach, it would cause a great deal of damage. To verify this, researchers did not make anyone ingest a razor blade. Instead, they looked at metal corrosion caused by stomach acid in vitro, which means “outside the body in a controlled environment.” Razor blade corrosion happens very quickly in the usual stomach, according to a report by Paul K. Li et al. 1 Now, I think this is a stretch, because a stomach with a razor blade in it wouldn't last long, and neither would the oesophagus. Nonetheless, according to the report, within 24 hours, double-edged blades become brittle and easily breakable, with just 63 percent of their original mass remaining. It's worth noting, however, that stomach acid had no effect on pennies during this time period, nor did it cause disc batteries to leak during the same period.

It would be a stretch to say that stomach acid would have a significant impact on a large chunk of steal in less than 24 hours, and things don't sit in your stomach for that long anyway. Razor blades are already very thin and flexible metal parts, so corroding them enough to make them brittle might not be as difficult as it seems. We don't know how long it will take to dissolve one absolutely.

Regardless, stomach acid seems to be capable of dissolving a razor blade in a fair amount of time, highlighting how amazing our digestive system is. But how can your stomach hold it without the acid eating right through it if the acid is so strong? If you eat a steak, it will quickly decompose into a liquid slurry of mushy nastiness. Isn't your stomach, after all, essentially meat? In the very least, it's made up of proteins. The reality is that if given the chance, your stomach acid would happily digest your stomach. When things don't go as planned, we get ulcers, which are open sores or raw areas in the stomach. When this occurs, it's because a significant enough amount of acid has come into daily contact with the stomach wall. 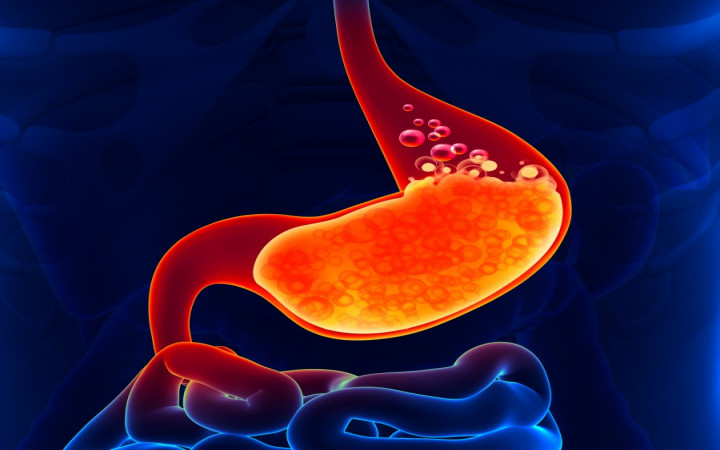 The stomach, on the other hand, normally has a protective lining. This lining is made up of a layer of mucosal protein (think mucus) that is coated with sugar molecules that are bound together by chemical bonds. The sugars are very resistant to the acid. This mucous is generated by a collection of specialised epithelial cells.

It isn't flawless, and some stomach acid does get in now and then. Although the stomach wall has a lot of blood flow, which helps to neutralise and wash away some of the acid, it also causes damage and kills some of the stomach cells. In reality, a large number of your stomach cells are killed on a regular basis. Fortunately, they are such busy little buggers when it comes to reproduction. They do not, in most cases, take vacation days. When cells are destroyed, new cells are produced to take their place. In reality, every three days, the entire stomach lining is replaced.

When something goes wrong and the mucus lining is weakened, more acid than normal gets in, damage can occur faster than cells can regenerate, resulting in a sore or even a void. This is referred to as an ulcer. Ulcers were once thought to be caused by a poor diet. Spicy or fatty foods, as well as cigarette smoking, alcohol intake, and simply a proclivity for creating excessive stomach acid, were all blamed. Although there isn't much evidence that eating habits or stress cause ulcers, these other factors may be at play. These earlier theories about the causes of ulcers, on the other hand, were more based on association. It's true that eating spicy foods, drinking alcohol, or being stressed can aggravate the pain and discomfort of ulcers. 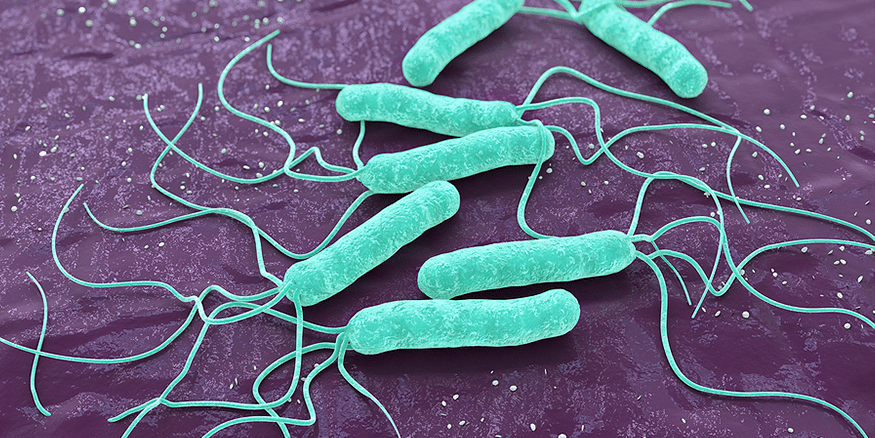 The most common cause of an ulcer is now thought to be a bacterial infection! It normally occurs when a bacteria called Heliobacter pylori infects the stomach (H. pylon). These bacteria are already present in the majority of people's intestines. These bugs can secrete an enzyme that protects them from stomach acid, and then they can infiltrate the mucosal layer, damaging the stomach lining and allowing too much acid to leak through, resulting in an ulcer. As a result, antibiotics are now one of the most popular therapies for ulcers.