Many chemical industries, especially oil refineries, petrochemical and pharmaceutical; consume large quantities of catalysts containing noble metals, such as platinum and palladium, these metals are not only expensive but their production is not sustainable, just to mention, it has been reported for a long time that platinum mining is one of the most polluting, it uses large amounts of aqua regia, a mixture of hydrochloric and nitric acids, which is a strong oxidizing mixture that has caused serious damage to the environment.

But a chemist at RUDN University found a way to reduce the consumption of palladium in catalysts and make their production more environmentally friendly by developing a catalyst that is based on a substance that comes from plant waste.

These are Fe2O3-polymer-Pd/Cu magnetic nanocomposites, developed as efficient and sustainable nanocatalysts for cross-coupling reactions. The catalysts are basically composed of three components: 1) a magnetic core of Fe2O3 nanoparticles, which allow a better recovery of the catalysts, increasing their interest as reusable and environmentally friendly catalysts; 2) a catechol-based polymer coating, which has a strong chelating capacity against metallic ions and is obtained from plant biomass, and 3) catalytically active metallic nanoparticles of palladium and copper immobilized in the polymer coating, which allows a lower incorporation of palladium in the catalyst. 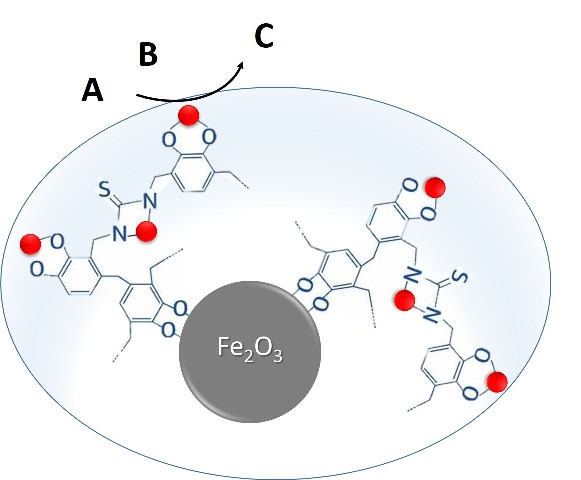 Representation of the structure of the catalyst. Source: image edited by the author in Powerpoint

Crosscoupled reactions are among the most widely used in industrial chemistry, used in the synthesis of plastics, drugs and other compounds. And the main catalyst for this type of reaction is particles of palladium, but this is a very scarce metal and difficult to obtain, which also makes it very expensive.

On the other side, in these reactions the consumption of palladium is very high because the particles of palladium contained in conventional catalysts tend to bind. The ways to avoid this is to modify the chemical properties of the palladium particles to prevent them from combining when they come into contact or to fix them to a grate to ensure that they stay in position. This second way was chosen to produce the new catalyst, basically enclosing the palladium particles using a casing with a magnetic core. In this way, the catalytic properties of the new compound come from the palladium nanoparticles that are incorporated over the nucleus and the polymer fixes these particles in place preventing them from binding.

It is important to note that with this new structure, these catalysts had a good capacity for reuse without a significant decrease in efficiency after several cycles. And another important advantage is the lower Pd or Cu content (1.5 and 2.6 wt.% respectively) compared to most similar catalysts (between 3 and 6 wt.% Pd and > 5 wt.% Cu), which is a great advance towards the development of cost-effective and environmentally friendly catalysts.

At present, chemists are very interested in green catalysts, and this type of input containing a vegetable waste recycling product and working more efficiently cross-coupling reactions constitute an advance for the production of economically more feasible products, since it will make the production of medicines, plastics and other products cheaper with the incorporation of a catalyst that can be reused for a longer period of time.

On the other side, not only are they able to reduce the consumption of palladium making the production process cheaper, but they are also beneficial for the environment since they could reduce the exploitation of this metal, since its main use, besides jewelry, is the production of catalysts.