Give Send Go - an alternative to GoFundMe

The constant censorship of anything conservative is getting beyond annoying. We have people on GoFundMe that are raising money for all manner of things, but it seems that time and time again that their projects get shut down right around the time they start to become successful. Conservatives are getting fed up with this and since they are a private company there really isn't anything that anyone can do about it... except to switch to something else.

I just found out about Give Send Go today and it could be a great thing for conservatives.

It is a Christian organization but that doesn't mean that you can't have fundraisers on there for other projects. For example: An organization that was attempting to raise money to verify mail in voting in Pennsylvania recently had their GoFundMe shut down as it started to gather a great deal of support surpassing 200,000 dollars. I don't know what the official reason was that GoFundMe provided for this, but I sure it was some legalese that was just an excuse but was in reality the fact that they do not want to give conservatives the opportunity to raise money for anything that goes against their own internal agenda just like Twitter, Facebook, Instagram, and basically anything owned by Google. 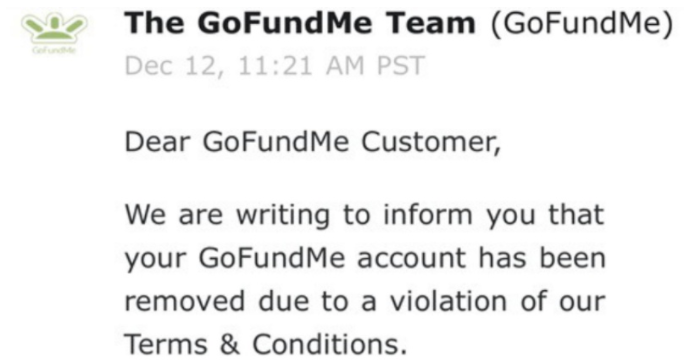 For conservatives who have had their GoFundMe operations shutdown, they are normally given this blanket statement and any follow ups inquiries end up getting unanswered. There probably is something in the Terms & Conditions that says they can reject your account for "any reason" which I suppose is their right since it is their company.

Kyle Rittenhouse, Laura Loomer, Gavin McInnes, and Candance Owens have all had their GoFundMe projects shut down for the same ambiguous reason. Although it isn't "ambiguous" at all if you put your politics to the side for a second and look at the writing on the wall.

I realize that there are going to be some people out there that would probably celebrate such shutdowns on the part of GoFundMe, but to those people I say this: How would you feel if the situation was reversed? Because if you accept this form of widespread censorship how long do you really think it is going to be before they come for you?

Thankfully Give Send Go is stepping up and the once barely known website is becoming a viable alternative to the obviously leftest establishment that exists. Hopefully this "is" will become a "was" as more and more people become aware of alternatives that exist that offer essentially the same product.

Postal whistleblower in Pennsylvania, Richard Hopkins has raised money in record time once he was banned from GoFundMe and moved over to GiveSendGo and I think we are going to start seeing a lot more of this in the future.

No matter where you stand on the political fence, if you are being objective you have to admit that there is definitive bias in major tech firms across the board. Give Send Go is just another company that is gaining major traction as this battle for internet freedom carries on.