Bloomberg to spend (at least) $100 million on Biden campaign. 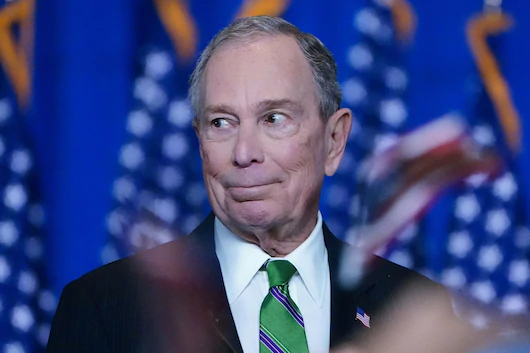 Mike Bloomberg plans to put his heavy thumb on the scales of electoral justice by contributing "at least" $100 million to Biden's campaign in Florida ["at least" being an unveiled threat to outspend potential donors on the other side]. So much for your average Joe and "the little guy."

Such blatant exploitation of the inherent absurdity of "campaign finance" laws totally demolishes the moralistic 2002 rhetoric used to justify tight limits on how much ordinary Americans can donate.

Individual citizens are now permitted to give no more than $2,800 to Biden or Trump. This cleverly criminalizes the possibility of 200 people matching Bloomberg's bid by pledging 200 donations of $500,000 each. That would be a federal felony. All 200 rogue donors would lose the right to vote, and possibly spend some quality time at one of 110 lovely federal prisons.

Donors are allowed to send much more money to PACS, but that only makes sense if you're part of an interest group, such as trial lawyers, teachers, Big Pharma or the military-industrial complex.

Campaign finance rules give much greater preference to the Democrat and Republican parties over mere people running for office. It allows ordinary sub-billionaire individuals to legally donate up to $35,500 to a political party. And contributions to national party committees are not limited at all.

But Never-Trump Republicans won't want to contribute to a bundled deal that sends their money to Trump, and Trump Democrats likewise won't want to share their donations with Republican Party bosses and staffers.

Campaign reform has been great for entrenched political interests, including the duopoly of national parties, but it greatly dis-empowers individual citizens. But there are massive loopholes for certain individuals who, like Mr. Bloomberg, are many times wealthier than Donald Trump, or even George Soros. It seems clear at this point, that political regulation of political contributions is bound to involve anti-democratic conflicts of interest.

The sirens of plutocracy ring louder than ever.