How to understand that blockchain is a trust-building technology? Blockchain is a kind of trust machine that is established without trust or lack of trust relationship. Therefore, blockchain is of great significance to developing countries, especially countries with relatively low trust. One is in terms of social development. Blockchain technology will help developing countries speed up their entry into a trusting society, enhance social governance and improve the trust environment, and the other is that for industry development, blockchain technology has a greater degree of trust. Industries that are low, or where there is a trust relationship but the trust relationship is not continuous, and the trust cost is relatively high have disruptive effects.

Specific to my country’s current period of historical opportunity and economic structural adjustment, by playing the role of blockchain technology integration, empowerment and linking, it is possible to avoid or no longer take the path of building a trusting society in Europe and the United States for nearly a hundred years. Therefore, It has a very important and long-term significance.

Analogous to the development process of the Internet, the blockchain should experience a process of penetration and diffusion from the academic circle and the technical circle to a wider range of users and broader scenarios. The Internet before the 1990s was still a topic and practice in the military, universities, colleges, and technology circles, such as TCP/IP, WWW and other protocols, and various clients (such as browsers, ftp clients, Telnet clients) only appeared in 1994. Terminal, etc.), and then there are commercial applications, such as portal, news, e-commerce, social, office, etc.

When human society enters a digital-driven society, data has no value in everyone's hands, and data is only valuable through sharing. Traditional data sharing and data protection have formed a natural contradiction, and the blockchain has emerged as the times require. The distributed ledger technology realizes data privacy protection while realizing data sharing. The economic significance of blockchain is that the marginal cost of centralized data sharing is already higher than the marginal effect.

For thousands of years, the construction of production relations and the evolution of the economy have been realized through centralization, and business is also realized through centralized organizations. In the future, blockchain technology can enable human society to provide endorsement mechanisms from countless centralized organizations. , To realize the transformation of the credit society through peer-to-peer transactions in a zero-trust environment. This will infinitely expand the trust space of mankind. If the current economic transaction scale is the benchmark value of 100, then the transaction scale entering the blockchain economy and society will become 100², or even N times.

A survey report shows that Beijing has a population of 20 million, and the car usage rate is about 4%. If the car usage efficiency reaches 30%, then under the same population level, the demand for cars is only one-third or fifth one.

Now, in Beijing, one person uses one car or two cars, but in the future comprehensive digital economy scenario, users can have one-thousandth of BMW, one-tenth of Audi and other digital ownership rights and rights of use. , This has formed a platform economy and a sharing economy around automobiles. The underlying foundation of this digital economy is the blockchain.

In the future, automobile companies will no longer sell cars, but become travel service providers. The future benchmark targets of auto companies may not be competitors such as BMW and Mercedes-Benz, but Google, Uber or even blockchain industry giants. It now appears that this is a setting of the relationship between blockchain technology and the digital economy, and it is likely to evolve into an objective existence in the next ten years.

What challenges are still facing the application of blockchain technology in the process of digital transformation? If we use blockchain to solve problems now, we may face the consensus problem of multi-party collaboration. The current difficulties of blockchain include the following:

According to our past consulting cases and personal experience, many users, even large corporate customers, do not understand the technical principles, standards, scenarios, capacity expansion, test chain, cross-chain and other professional knowledge of blockchain. For privacy calculations, digital watermarks , Zero-knowledge proof, homomorphic encryption and other more detailed technical research, understanding and understanding are more limited. In addition, there is still a lack of vertical blockchain technology training companies and media companies that can play an objective and independent role, and they have not yet been able to purify, guide and cultivate the blockchain industry environment and trend research.

Blockchain projects are different from the "stacks" of traditional information projects, and need to be fully considered and designed in terms of processes, incentives, standards, governance, and ecology.

When many customers are doing blockchain projects, they will be compared to ERP (Enterprise Resource Planning), MES (Production Information Management System), HIS (Hospital Information System) or EMRS (Electronic Medical Record Information System) and other projects, or Its iteratively upgraded version. In fact, in the early stage of the development of blockchain applications, the systemization and standardization of blockchain platforms will become an important "magic weapon", and efficient multi-party collaboration is the key to victory.

The blockchain network is called a value network because in the network, each participant is carrying the transmission of network value. The participants involved may include large enterprises, small and medium enterprises, and even individuals. Only when multiple parties work for a common goal, blockchain can better enable cross-enterprise cooperation. Formulating reasonable incentive mechanisms, task allocation and performance appraisal methods are also the core principles it follows.

opportunity What kind of development picture will blockchain technology present in terms of application?

First, the role and potential of blockchain in government, medical and other public service industries are huge.

Because there is no difference between the government industry and the financial service industry, they must provide services such as loan, marriage certificate, social insurance, and medical insurance, which are all digital-intensive industries. A starting point for the combination of blockchain and government public service industries, we believe that a blockchain city is the combination of the underlying technical services of the blockchain and a smart city.

Realize data sharing between G2G, G2B and G2C through blockchain technology, provide citizens with more high-quality and convenient public services, provide enterprises with a stable, transparent, convenient and efficient business environment, and contribute to the government’s The modernization of the governance capacity of the national governance system provides reliable support

In the public medical field, due to the high privacy of medical data and the particularity of the scene, poor data circulation and information asymmetry have exacerbated poor medical experience, long diagnosis and treatment cycles, poor mutual recognition of results, contradictions between doctors and patients, and counterfeit medicines. Many other problems emerge in an endless stream and are difficult to avoid. In the face of various problems or pain points in the medical and health industry, blockchain, on the premise of ensuring the privacy of patient data, opens up channels for information circulation, storage and sharing of medical data, thereby improving the current status of data islands between institutions and rebuilding The trust between doctors and patients improves industry efficiency.

Second, the financial industry is still the main battlefield of the blockchain industry, but its relative importance is declining.

Third, blockchain still has a lot of room for development in the field of supply chain finance.

The overall efficiency of my country's supply chain is still relatively low, but the improvement of supply chain process efficiency will undoubtedly be of great significance for accelerating the transformation and upgrading of my country's intelligent manufacturing and Industry 4.0. The supply chain and industrial chain can be reshaped through the blockchain, and it is still in the stage of integration of two chains and three chains as a whole. , What role does blockchain technology play in personal privacy protection and network security?

First, we must correctly understand the relationship between privacy and sharing.

As long as it is shared, the possibility of data leakage and privacy leakage will increase. It is impossible to achieve data sharing and at the same time have particularly good privacy protection.

Second, we must correctly understand the relationship between blockchain and privacy.

For example, the fastest for a bank to handle international remittance business is three days, and many forms need to be filled out, which may involve repeated cross-checking and verification by multiple bank intermediaries. And joining these bank intermediary nodes are all in the same blockchain network, the situation is very different, because the blockchain can provide privacy protection and data sharing at the same time, each node unit only needs two or three data items to verify and Confirmation is OK, so the blockchain is revolutionary for privacy protection.

Second, the essence of the digital economy is the data economy. The development of the digital economy requires a large amount of data. If a large amount of data is true, relevant, and useful, it would be perfect. The reality is that a large amount of data may be of low quality, false, irrelevant, and low value density. of. Blockchain can play a role in filtering and screening data, and then secure access and credible sharing of high-quality and credible data, thereby purifying the value of big data analysis or empowering AI algorithm learning. Therefore, we believe that the blockchain fundamentally changes the data access technology, but does not change the data analysis technology. Third, what we call cloud computing is more for the internal of enterprises. What is the concept of blockchain? The significance of blockchain is like ERP for enterprises, which is internal process management. If the business ecology of the future enterprise is built based on blockchain services, this is not a simple iterative relationship, but a system transformation. Therefore, blockchain is not only a network technology, but it may also be built on top of a cloud computing platform. 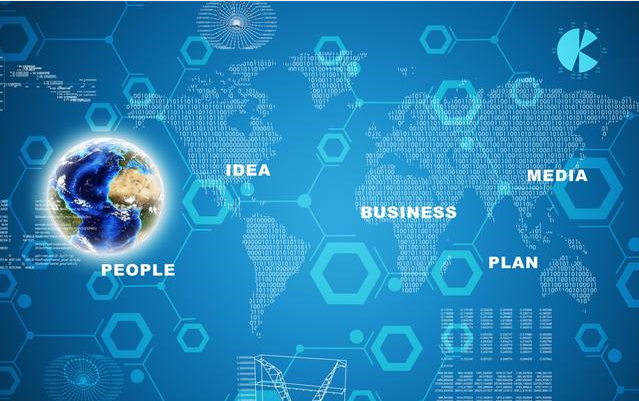