One of the things that dazzled me when I was traveling, particularly in Asia, was that electronics in a general sense are dramatically cheaperthere than they are in the United States. This, for some reason, did not apply to computers which were actually quite a lot more expensive there than they are in USA. This must be a supply and demand thing which to me makes no sense because most of the computers are actually made over in that part of the world. I didn't need another computer anyway so it wasn't a factor for me but when I was in Laos visiting a friend he told me that it is actually cheaper for him to purchase a computer in the United States online, have it sent to his parents' house, and then pay the shipping over to Laos than it was for him to buy exactly the same computer in Laos.

I don't know what the reason for this is but I'm sure there is something involving the government. I dunno, I don't care enough to look into it either.

However, I do want to focus on the widespread cheap electronics that exist all over the place and for my example I will focus on Thailand, and Malaysia because this is where it was most evident to me.

There are many shopping malls in major cities in both of these countries whose interior is almost exclusively electronics, namely smaller electronics like tablets, phones, and gaming systems. There are hundreds of stores in there yet all of them seem to be selling nearly exactly the same products. This defies all logic because how could there be hundreds of stores all selling the same thing and all of them manage to stay in business.

Then I inquired about some phones at a place because at the time I was there I was using a roaming package on my USA phone that was costing me $10 a day and the network speeds were really slow. My USA phone at the time did not have the ability to simply swap out a simcard - again, by means I do not understand - so when I was looking at these phones I noticed that a lot of them, which were major brand names like Samsung and Apple, were less than $100. Since I was going to be traveling for months at that point in time it didn't make sense to not purchase this phone since after a mere 10 days the phone was going to pay for itself.

I don't recall exactly what model it was meant to be but it was an I-phone of some sort and it was touted as being "last generation" and that is why it was so cheap. I was extremely naive to believe this information, but I did. After a brief exchange of information and the installation of a simcard and passing over of the phone I walked away, immediately having data, feeling like I had found myself one hell of a deal.

It only took about a week before I realized that I maybe had been taken for the fool that I was. For one thing, the phone battery was dying in just a few hours and even though the phone was meant to be much newer than the phone than I had brought with me, it was dramatically slower. It is also worth noting that up to that point I had never owned an I-phone before so my initial reaction was one of feeling as though this is simply what I-phone owners put up with.

After about a week the phone was barely functioning, and after 2 weeks (at which point I had already changed cities) the phone would only function if it was plugged in - which kind of defeats the purpose of having a pocket computer now, doesn't it?

I realized soon thereafter that I had been sold a cheap copy of a phone that is designed to look like the real deal but definitely isn't and while this might seem so silly to those of you out there that are smarter than me, the way in which they present these phones.... well, lets just say they are excellent con-men.

You know the old adage of "if it sounds too good to be true it is because it isn't true" ? Well that applies to so much in life and even though it was only for $100 or so I am still upset about this to this day. 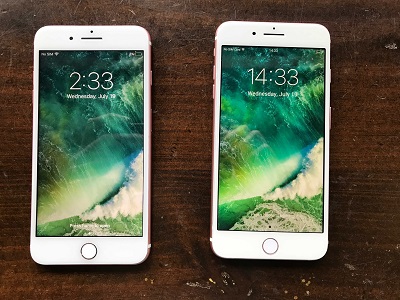 Some of these fakes are designed to look and feel like the real thing and are built with substandard parts that actually WILL function perfectly and just like the real thing.... but only for a short while. One such experiment using the above two phone even fooled people who work for Apple and it is an interesting article.

The moral of the story is that if you are traveling around Asia, especially in South East Asia, be on the lookout for places that are selling things too cheap and this is most true with shops that are not shops, but rather just little kiosks in the middle of the mall.

When I returned to the city that I had bought the phone in I went back to that location only to discover that the people I had bought the phone from were not there anymore. The new shop was selling essentially the same gear but it was not the same people. I had nowhere to turn and even if I had found these guys, what was I going to do exactly? Kick their asses and have the entire kiosk center of con men turn on me?

The moral of the story is that it is not a good idea to purchase extremely cheap electronics in Asia and if you find yourself in a position where you need to, make sure it is a real store, not one of the shady kiosks in the middle of what is already pretty clearly a shopping mall filled with counterfeit merch.