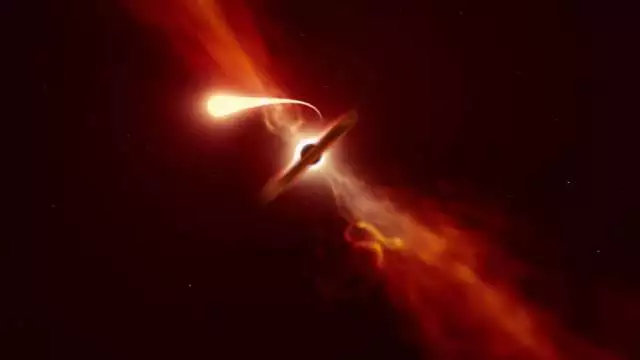 A star is torn apart by a black hole that is 215 million light years away. Observations show the star has nearly the same mass as the sun, then loses about half of it as it approaches the black hole.

This extraordinary cosmic death is known as a tidal disruption event (TDE) as well as the closest incident ever recorded. When the star shattered a bright flash of light appeared. TDE is known as AT2019qi.

The Monthly Notices of the Royal Astronomical Society report says a black hole about 1 million times the mass of the sun attracts a star roughly the size of the sun. When an object is too close to a black hole, it will be attracted by strong gravity and often results in death due to spaghetification.

Spaghetification is the stretching and destruction of stars around a black hole. The heated material becomes plasma which then rotates around the black hole.

"Black holes that 'suck' nearby stars sound like science fiction, but it is really real," said Matt Nicholl, researcher and lead author of the Royal Astronomical Society at the University of Birmingham, as quoted by IFL Science , Tuesday ( 13/10/2020).

When material from these stars falls into the black hole, they are heated to high temperatures, releasing bright bursts of energy. But the problem with this observation is that the flares are often blocked by dust and debris.

The study shows the debris comes from the star itself rotating around the black hole. As they move away, the material cools and becomes a hindrance to observation.

"We can see the debris being pulled as the black hole launches a powerful stream of material at speeds of up to 10,000 kilometers per second," said co-author Kate Alexander.